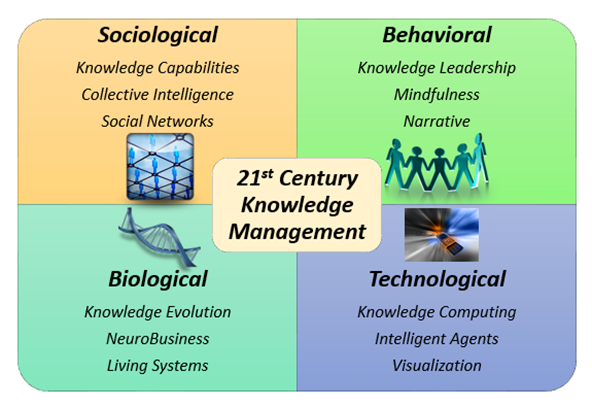 In today’s post-industrial  and post-informational society, KM is enjoying a stunning renaissance. Knowledge creation and innovation are leading many of the modern priorities of business, government and civil society.

The stale project and information-based KM of the past has been replace by an exciting, people-centered, focus-on-the future. The information museums of 1990s legacy KM are being retired by fast-moving, social engines of innovation and prosperity.

Nowhere is this more apparent than in Northern California. ‘’Nor Cal’ is often cited as the birthplace of modern organizational knowledge management (KM). Many see the dramatic KM pivot as a return to the original principles of KM shaped at Berkeley, Stanford Research Institute, Hewlett-Packard and other Northern California institutions more than a generation ago.

Unfortunately, starting in the mid-1990s, KM was hijacked by hungry information technology (IT) vendors, old-school industry consortia and unscrupulous consultants. They were eager to cash-in on the ever-expanding deployment of Internet applications, enterprise process management and the seismic organizational changes of the late 20th Century.

Most all of their information-based, project-oriented portal and repository logic delivered comprehensive failures. They trampled on the principles of authentic KM. It was a costly mistake for business.

Fortunately these IT disasters of the 1990s called KM lasted about as long as the Spice Girls, Tamagotchi and curtained haircuts.

All these 1990s IT boondoggles masquerading as KM had two common defects – technology-centrism and the clinical preoccupation with standards, process and measurement. The mantra of the time was, ‘Don’t Automate, Obliterate!’ (Champy + Hammer)

Meanwhile, the absolute foundation of all effective KM, socialization, wasn’t ‘discovered’ by counterfeit KM people and glib business pundits until a decade later. Most the damage was done. It was a painful and difficult time for Authentic KM.

When the new Millennium rolled around, people began to embrace the all-important KM founding principle of socialization. They quickly came to accept the profound social reorientation of work, productivity, innovation and prosperity. When Colabria Action Research convened the world’s first ‘Social Media’ conference in London the die was cast.

Remember back in the early 2000s when smarmy pundits began attaching social to everything under the sun? It was unfortunate, but also fortuitous. Finally, Authentic KM was back. 21st Century KM was born!

Still, in 2014, the moldering KM Establishment is clinging to the vestiges of their 1990s IT-led fiascoes. Unbelievably, their conferences and confabs, products, blogs and narratives are all just a useless re-tread of the failed legacy IT initiatives and reviled ‘change management’ of the 1990s. It seems the social revolution has furnished yet another excuse for more centrally-controlled, technology-based, IT failures and interventions called KM.

For example, in an era when Wikipedia is The Top Source Of Health Care Info For Doctors it is safe to retire all the KM nonsense concerning IT, sharing, culture, applications, architectures, training, certification and, above all, the soaring farce of KM Standards.

Of course the KM Establishment has long since abandoned California and Silicon Valley and vice-versa. The project-centered, command-and-control, document-centered and information-based KM hubris really never fit the people-centered birthplace of KM.

However, in 2014 and beyond the Northern California traditions of entrepreneurship, startup finance, evolutionary development and disruptive innovation will again achieve fundamental and perpetual advancements for 21st Century KM.

Colabria applauds the dramatic KM pivot. Global network actors are rapidly advancing the KM pivot. It is time to take back KM and Create the Future!