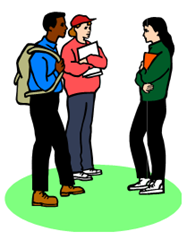 It is time to set the record straight: conversation and discussion are two very different concepts and behaviors! Both are important. They have different venues, purposes, practices and above all, outcomes.

Discussion is for sharing information. Conversation is for knowledge creation. 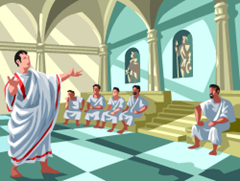 The root of discussion tells a lot. It comes from Latin – discussus: struck asunder, shaken, scattered, to shake, strike, break apart. The modern root comes from Old French: examination, investigation, legal trial. Today’s meaning of discussion may be to ‘get to the bottom’ of something.

In discussion the outcome is more/less known (deterministic). Discussion is a one-way examination, a probe, an investigation. Thus, the panic that sets in when the boss says, ‘I’d like to discuss something with you,’ is justified. You are being investigated. Yikes!

Meanwhile, the root of conversation is much different. Origins are the same. The Latin root, conversationem is “to live with,” literally and proximately to “turn about with,” to dance. In Old French conversation is “living together, having dealings with others,” and the ”manner of conducting oneself in the world.”

In conversation the outcome is unknown (non-deterministic). Conversation is empathetic discovery through exchange. Thus, the joy you feel when the boss asks you, ‘Could you lead the conversation’ is justified. You are valued.

Vulnerability is required for authentic conversation. Conversation depends heavily on oxytocin – a mammalian neurohypophysial hormone, secreted by the posterior pituitary gland that acts primarily as a neuromodulator in the brain.

Furthermore, discussion and conversation are different in the same way storytelling and narrative are different.

In business, politics, govt and civil society there is far too much discussion and far too little conversation.

Not to mention a lot of what is claimed even to be online discussion is really argument… which is even further afield from conversation.

Meanwhile, to make matters worse, argument is also confused with discussion. Argument, in these sense of logic and philosophy, is simply an attempt to persuade someone of something, by giving reasons for accepting a particular conclusion as evident. Argument is not discussion or conversation.

Online interactions, in Twitter or discussion groups, are information sharing, discussion or argument. There are really very few authentic conversations in Twitter.

Online argumentation suffers low quality. It is chock full of logical fallacies. This draws it further out from most semblance of discussion. To be honest social media really aren’t much good for either argument or discussion. Social media are useless and harmful for conversation.

In many ways these defects are what makes social media popular. They relieve people from the rigors of coherent, mindful thinking, writing and commenting.

Remember, authentic conversation is predicated on empathy, vulnerability, proximity, and according to modern psychoneuroendocrinology, unique brain hormones like the aforementioned oxytocin. It doesn’t take long to see these key properties are objectively absent from online groups. Excellence in conversation is a proximate activity. 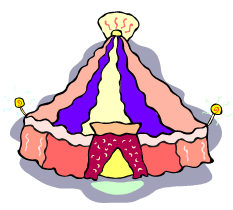 Still, discussion is a very big tent. Dialogue, sharing, argument, collaboration, and so on all are popular and proper inhabitants of discussion.

Finally, the principle of online discussion is a Western/Cartesian notion that information is outside or separate from the individual, e.g., I Tweet therefore I am.

Conversation, on the most stark contrary, is intimate and inseparable from the vulnerable individual, e.g., I love therefore I am.

Discussion is measured; conversation is nurtured, and so on and so forth.