Thanks to everyone for supporting your Colabria Action Research Networks.

Most people are aware that the principal modality of Colabria is authentic conversation. Still, after so many years, many people ask for Colabria content to be computer-mediated and recorded. This is a disappointment. It indicates that many people still do not know what conversation is and why it matters.

Conversation is conversation. The best are authentic. 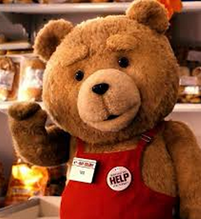 For example, Colabria is not TED. Unlike TED (Technology, Entertainment, Design) Colabria’s middle-name is not ‘Entertainment.’ (It’s action – FYI.)

Colabria does not trade in or sponsor TED-like hubris.

Colabria is about revealing networks, creating ideas and solving tough problems. It is not about spreading stuff. TED traffics in techno-fetishism.

Technology entertainment like TED may give some people a thrill. Frankly, the movie TED was more far entertaining than any TED conference or video bit.

Meanwhile, conversation is specific, precious, proximate and, sadly, extremely rare. Or, as Peter Senge says, concerning all organizations, in a terse and precise Internet vernacular, “Most conversations suck.”

The reason conversations suck is because most people do not even know what an authentic conversation is. They are, in a word, clueless.

This is a major reason they request to watch a video. People are often afraid of conversation. It’s because vulnerability is required for authentic conversation.

Authentic conversation is empathetic discovery through proximate exchange. No exceptions.

Authentic conversation depends heavily on oxytocin – a mammalian neurohypophysial hormone. Oxytocin is secreted by the posterior pituitary gland. It is primarily a neuromodulator in the brain. Oxytocin is largely absent from online collaboration and videoconferencing. That makes them suck too.

Videoconferencing has been relatively low-cost, common and widespread for upwards of 30 years. It’s practically free now and everywhere. Yet, airport parking is packed and business flights are overfull. Gee, how could this be? Darn it, our vendor said collaborative technology would reduce corporate travel…

Look, ask any airline executive what creates the vast majority of airlines profit — yep, it is proximate business conversation. That’s right, airlines are in the conversation business. Why? Because conversation is good business.

Same goes for the people that make office buildings for knowledge workers. Anyone that believes the nonsense that increasing online collaboration reduces travel has been misled.

Also, with consumerization, mandating collaborative applications and media is a big mistake. It makes your organization dumber.

Most of you are deliberately making your organization less intelligent through your widespread misuse of collaborative technology. More technology is not the solution, it’s the problem!

Of course there are thoughtful, legitimate and effective applications of collaborative technologies. They produce continuous innovation and stunning outcomes. You will need to engage Colabria Action Research to learn how.

(A point reinforced strongly at ‘In Conversation‘ by Dave Snowden last month in San Francisco.)

More than 70% of US workers are disengaged to some degree because proximate conversation is so scarce and so sucky.