Sahana Chattopadhyay has thoughtfully modulated the well-known Cynefin Framework for heutagogy or self-determined learning. The current version is below. 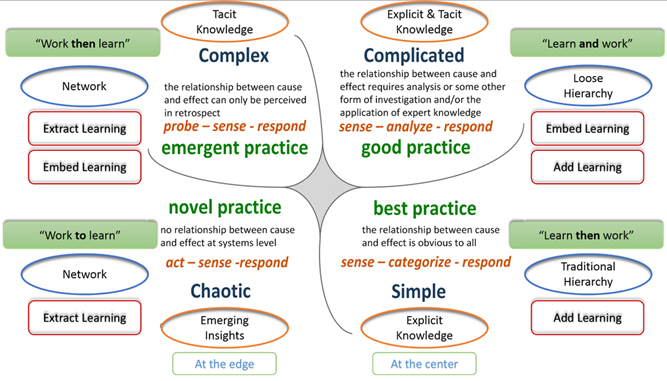 Self-determined learning and distributed phronesis are essential planks of 21st Century Learning. To refract and anneal self-directed and organizational learning vis-à-vis an existing framework is an apt contribution.

Several elements are absent and need to be added to comport with 21st Century Learning. For example, a core mission of the modern network organization is creating customer value through perpetual knowledge creation.

21st Century Learning is the foundation of The Creative Class, The Knowledge Economy, The Connected Age and The Social Enterprise. Thus, contemporary learning is entirely focused on evolutionary development and creating the future.

Recall,  heutagogy is the deliberate creation of new knowledge, by definition. Thus, the following adjustments are urged.

Firstly, the activity of learning implies knowledge creation and evolutionary development. However, for heutagogy it must be stated precisely and with certainty.

In addition, it is essential to add learning from the emerging future. Therefore, the definitive focus and elaboration of knowledge creation, development and the future will further cohere the Heutagogy Framework. It will then align with Colabria’s 21st Century Learning.

For example, see Training versus Development.

Thirdly, learning is a continuous activity. It is harmful to claim one type of knowledge inhabits one quadrant and not another. Recall, knowledge and doing are inseparable. 21st Century Learning reveals knowledge flow-paths not boundaries.

For example, Colabria’s ‘Next Practices‘ are capable of generating great tacit insight, flow and heutagogy. Meanwhile, ‘Emerging Insight’ can be quite specific and concrete. In short, the highly pedestrian, Western-Cartesian mindset and notion of knowledge must not corrupt the Heutagogy Framework. The Western-Cartesian view of knowledge is largely incompatible with Colabria’s 21st Century Learning.

Furthermore, it is important not to allow failed learning establishment to co-opt or exploit heutagogy. The continued, institutional misuse of training, information technology and counterproductive ‘learning management systems‘ (LMS) must cease. The failed, 20th Century learning approach of pedantic curricula, eye-watering measurement, didactic training programs and processes must give way, be retired.

The command-and-control and program-orientation approach of the waning learning establishment must transform to cultivate-and-coordinate. 21st Century Learning is about creating the future not creating certifications or credentials. Narrative leads the learning workscape.

Colabria Action Research encourages your comments and improvements. All are looking forward to the next version, the Heutagogy Framework 2.0!