Organizational Hierarchy is an authoritarian concept where people and groups are ranked one above the other according to status. In hierarchy, one actor, the hierarch, is superior to all of the others in the network set. Hierarchical authority in multiple network sets is transitive, e.g., a general manager in Poughkeepsie has the same authority as one in Kokomo. In addition, no actor is superior to itself in the same set, i.e., there are no circular relationships in hierarchy. We all know this popular organizing principle. It is simple.

Hierarchy has exists for millennia because it offers attractive advantages. It is a primary human organizing foundation. From the Roman Legions to the Catholic Church to the Department of State to the local school board, hierarchy is pervasive and effective. Advantages of hierarchy include predictability, dependable resource allocation, legal compliance, disaster planning, brand continuity, etc.

Hierarchy has grave problems too. They include uncontrolled bureaucracy, inertia, withering costs, poor information flow and so on. Transitive authority is the another concern of hierarchy.

Pay ratios of highest to lowest is where hierarchy really goes-of-the-rails. In the USA you can find 1,795-to-1 pay multiples for the hierarch (CEO) to employee. It is unsustainable.

Another interesting observation of  hierarchy is physical location. In the USA the hierarchs, the CXOs, are usually away from the workers, in the corner office or top floor. In other business cultures it is different, with the bosses seated in the center of the action, among the employees. They are the hubs of the social networks.

(Editor’s note: The difference is likely because if the USA CEO is paid 1,795 times their employees then there are safety concerns. Thus, it is prudent to keep the CEO away from the rank and file employees. The comer office, with multiple escape routes, is for CEO safety.) 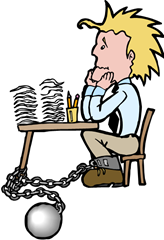 Finally, look at two organizing foundations of the enterprise: hierarchy and processes. What are they based on? Yep, chains – chain of command and value chains.

What other human organizing foundation, about 10,000 years old, is based on chains? That’s right, slavery. Slaves are not people, they are property. They are… human resources!

Meanwhile, show most all managers and workers their org chart. Then ask if the org chart represents is how work gets done. Expect peals of laughter!

Humans are clever, social and network creatures. They get work done in spite of hierarchy.

Management does spend a lot of time moving boxes on the org chart. In practice they are conducting social network analysis (SNA) to optimize networks for performance. In reality they are configuring authority and pay scales to suit themselves. Most workers just take it in stride.

Introducing Colabria Megaphones. Megaphones are akin to Pinocchios in the Washington Post. ‘WaPo’ Pinocchios are a scale from one to four. One Pinocchio is ‘some shading of the facts.’ Four Pinocchios is a ‘whopper’ or simply an outright lie. 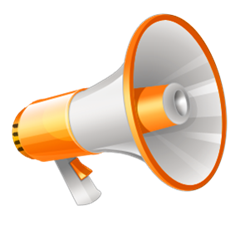 Colabria Megaphones offer a similar model. They are for well-accepted and practiced business management and leadership principles that are still being corrupted. A megaphone was chosen because unscrupulous people that use punditry to deliberately confuse issues must be called out.

One Megaphone is for concepts that are widely accepted but are still being corrupted by the plainly naive or simply misinformed.  The damage is modest.

At the other end of the scale, Four Megaphones is earned when the offense is egregious and the violation is deliberate. Four Megaphones are earned by counterfeit pundits and  so-called experts. These are often respected people that know better and are just protecting their turf. Four Megaphones cannot be earned for simple indifference or plain stupidity. Four Megaphones felonies are committed consciously and intentionally.

Like positively all human organizing foundations hierarchy is a social network. There are no exceptions. Most hierarchy is a tree or hub-and-spoke network structure. The organization chart is a hierarchy. The CEO is often the hierarch. It’s why she is called chief.

The first winner of Colabria’s Four Megaphones is respected leaders and pundits that believe and promote the notion that hierarchy is not a social network. Some offenders claim hierarchy is not a network at all! The deception is deliberate. They do it to protect their own incurious mindset and network naivety. Beware.

Remember, organizational hierarchy is social network. Hierarchy enjoys all the rich and varied methods of network science and graph theory for elaboration and mastery.

Four Megaphone people don’t describe what a hierarchy is. Rather, they compare it to other social network patterns like communities, teams, circles and groups. This adds insult to injury. Shame on them.

Hierarchy is not going away. Rather, more effective abstractions, like networks and ecologies, will optimize the benefits of hierarchy.