For one reason or another online knowledge management (KM) groups attracts philosophical scholarship. Often it is just academic bloviating. Sometimes it descends into intellectual bullying and trolling. For the most part, KM and philosophy don’t mix. 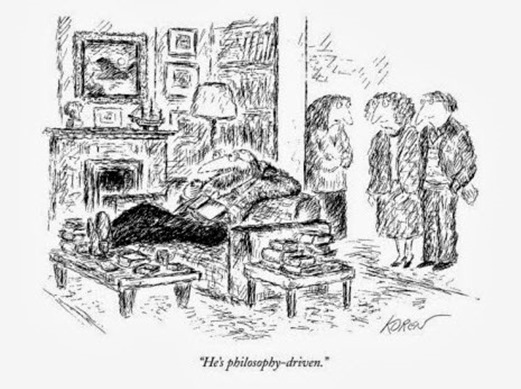 Of course reasonable people just ignore divisive and counter-productive behaviors of amateur philosophers in online KM groups. Still, because many people in lack formal, university-level study in philosophy, academic bullying in online KM groups is problematic. Those new to KM or just curious are driven away by academic arrogance. It hurts KM. Beware.

The term knowledge worker was first coined by Peter Drucker in 1959. Even professor Drucker warned us to beware of ‘Confucius-type Mandarins’ when pursuing excellence in business management.

There simply is no license to be an academic bully with KM people. The average business or government KM professional has little appetite for American Pragmatism, Hermeneutics, Dialectics and so on.

Lofty academics are fine. Thing is, they are harmful for busy KM business professionals trying to solve vexing, urgent problems. Our suggestion to our beard-stroking amateur philosopher friends is to learn about the most critical KM principle: CONTEXT.

Most knowledge theory and philosophy scholarship has an objective and deliberate lack of business, organizational, societal or contemporary context. This property renders philosophical theory mostly meaningless for KM professionals.

Meanwhile, online KM groups are for one primary purpose: networking. The specific goal can be summed up as: “…a great way for organizations to keep in touch with their members about current events…” (LinkedIn)

KM is about connection not collection. Knowledge creation is achieved through connection and interaction of people. Groups serve this purpose. Group discussion is mostly superficial. It is intended to deliver robust, high-quality connections.

Too often group trolls and amateurs pursue argumentum ad hominem (the logical fallacy of attacking the speaker, not the topic). KM people are often looking for genuine connection. We have seen KM philosophy trolls use terms for KM people like ‘lost,’ ‘lazy,’ ‘naive,’ ‘missed-out’, lacking ‘decency,’ ‘chauvinistic,’ ‘ignorant,’ expressing ‘hatred,’ and so forth.

These online group claims and poor netiquette do not bother seasoned KM professional since we simply dismiss the trolls and their pedantic philosophy. However, they can bother others, often very much. They repel ordinary people from engaging and commenting.

Again, graduate-level philosophy discourse is fine. It’s just not appropriate for ordinary KM Business Networking Groups. There are the many excellent online philosophy groups with many diverse forums.

It is just far more effective to conduct thoughtful, contextual discussions to advance interaction and networking of ALL members. Most groups exists to advance the joy of practical KM and networking. Intellectual and arcane academic bullying using pedantic philosophical scholarship is simply counterproductive for KM.