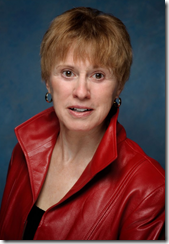 Knowledge management began in the mid 1990’s. Before that time knowledge was typically considered the province of training and was thought of as an individual capability. However, in the mid-90s Peter Drucker began to write about “knowledge workers” and the “knowledge economy” and proposed the idea that knowledge was a critical organizational asset that was as important as capital or property. 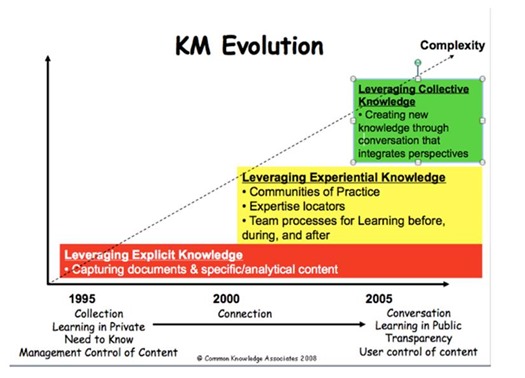 The initial idea of knowledge management was that an organization’s knowledge needed to be documented and then placed in a database where everyone could access it whenever they needed it – no longer would employees only be able to learn when attending a training class. Efforts were made to capture an organization’s best practices and lessons learned. Organizations spent large sums of money creating repositories and databases and employees were encouraged, sometimes even badgered, into contributing to them. The prevailing way of thinking about knowledge management was as a library or a warehouse with inputs and outputs, the more inputs the better.

By 2000 the limitations of content management were becoming evident:

1. Organizations found it difficult to get people to document their knowledge, and even more difficult to get others to make use of what had been documented and stored. Users found tools (checklists, steps in a process) useful as well as reusable documents (PP presentations, proposals) but lessons learned and best practices were largely ignored.

1. much of an organization’s knowledge is in the heads of employees, with only a small percentage residing in documents, still recognizing that some explicit knowledge is needed and should be maintained

2. much of an organization’s knowledge is dynamic and rapidly changing so that what is “captured” is soon out-of-date

3. knowledge is essentially social and is developed and held by groups of people who engage together in a specific practice.

Etienne Wenger’s book Communities of Practice, that named and explained this phenomena, came out in 2000. Organizations began to support communities of peers, providing a way for them to ask for and receive knowledge on a just-in-time basis and thus keeping fast changing knowledge up-to-date. The Q&A that is ubiquitous in communities provided a way for employees to share their tacit knowledge in response to specific situations. By 2005 nearly every Fortune 500 Company had established Communities of Practice, acknowledging the growing understanding that knowledge is largely a property of groups of people.

My book Common Knowledge also came out in 2000 and talked about the knowledge management processes through which teams and projects could share their knowledge. Organizations put After Action Reviews into place to promote continuous learning in teams and projects so that what was being learned in the field could be continually updated. Expertise Locator systems helped employees draw on the knowledge of experts across an organization and Knowledge Harvesting helped to move knowledge from one team/project to another.

However by 2005 the limitations of even this expanded perspective on organizational knowledge began to be recognized:

2. Knowledge management was primarily dealing with existing knowledge, attempting to bring all units up to the best in class of the organization. But it did not help organizations create new knowledge or spur innovation.

Although the first thinking about Leveraging Collective Knowledge began to appear around 2005, there are only a few leading edge organizations that have developed new practices for making use of their organization’s collective knowledge. Most organizations are still centered in the perspective of the second era and some, who have come late to knowledge management, are still struggling with getting good content management in place.

Those that are inventing processes for collective knowledge are finding ways to bring the whole organization to bear on strategic issues. Process like Knowledge Café’s, Appreciative Inquiry, and Search Conferences bring together all levels of the organization – the whole system in the room. The processes used to leverage collective knowledge are conversation based, alternating between small group and large group configurations. Even regularly held organizational meetings such as staff meetings, team, and project meetings in these organizations are turning to conversational forms to address their most difficult organizational issues. There is a growing understanding that in an age of increasingly complex organizational issues, leaders cannot be expected to have all the answers; rather the task of leaders becomes convening the conversations that can come up with new answers.

Leading edge organizations are taking advantage of Web 2.0 social media, building more user controlled platforms such as Wiki’s, blogs and social networking (e.g. Facebook) that bring with them greater organizational transparency and give rise to more diverse perspectives in the organizational conversation. The use of crowd sourcing, cognitive diversity, and predictive markets draw on a wider base of thinking, both internally and externally, that increases organizational innovation.